... is a re-release of the infamous old Death Tothe cassette tape demos that preceded their debut album "Candy's Speech" from 1996. All these highly enjoyable lo fi gems of distortion, humour and experiment - with one exception - derive from these legendary tapes:

1991: IN LACK OF GODS... MOTHERFUCKERS UNITE
Chainsaw Is Good Beginning
Glued Down Rubber Bar
Death Funk
Part of the Action
Crampdown
Rådhusklokkerne
Fragment VII; Me and My Plastic Posse

We have selected the songs that have never since been released, and chosen the best versions of the few songs that were demo'ed twice. And then there is the live-favourite "Tha" that was recorded during the "Motherfuckers Unite" sessions but didn't make the tape. We have mastered this selection from the original tapes (not the masters as these have mysteriously disappeared), so the lo lo fidelity remains intact even if we've tried to enhance the sound somewhat.

We hope old fans and new listeners will enjoy these recordings combining extreme noise, toy instruments and all possible musical genres with lyrics with references to everything from gory b-flicks, Monty Python, The Simpsons and Ren and Stimpy - and the band's semi-perverse addiction to bockwurst and cherry wine.

Yes, motherfuckers, this is death to the bone - just how you like it.

Written, recorded and produced around Copenhagen by Death Tothe and Uffe Lauesen
Artwork by Martin "Fede Mama" Schiøler (Motherfuckers Unite), Stærke Tonny (Bone) and DødsTor & Bart (Just How You Like It)
This compilation c+p 2006 Crunchy Frog
All songs published by Crunchy Tunes. BIEM/NcB 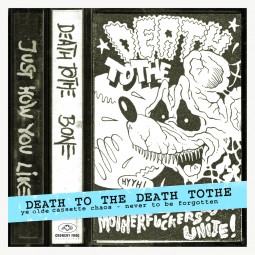