This album has been recorded in a forest, in a cabin with no modern comfort whatsoever. There was rain and birds chirped mysteriously all around, invisible like spirits. The cabin was old and haunted, a perfect place to record songs that talk to the soul. The recording took two days and two nights. The result: folkish songs with a gentle psychedelia twist, underlined with shadow and mystery. And, of course, a pinch of humor, here and there, because the sun can always pierce the darkest foliage...
Sebastién Doubinsky

In the fall of 2007 Kim and the Cinders packed up the Kondi Frost studio and set out for the deep dark swedish woods in two Volvo 245s to record this album. The locations were inside, outside and around a small 1867 wooden house with no running water and no electricity. Power was provided by a gasoline generator - which is heard on many recordings by the way - and locations were chosen on the fly in order to capture the atmosphere of the songs, the surroundings, the weather, the insanity of it all. Thus the recordings and performances are permeated by a great ambience - a sense of time and place - that really puts you there. Under the beech in the pouring rain. Outside the house in the dead of night. Between the pines in the early morning. Inside the trailer driving through the woods. All the unique, special, crazy and even dangerous locations chosen by the band and producer The Great Nalna. This booklet contains some images to go along with the recordings as does the documentary included on the CD and available for viewing and download on www.kimandthecinders.dk. 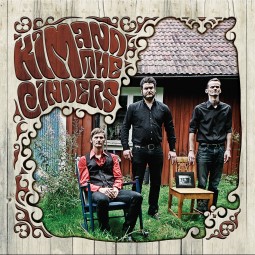