Crazy Summer
Summer Time – The Roughest Time
Let My Shoes Lead Me Forward
Those Winters
Bitter? No I Just Love To Complain
Would I Play With My Band?
Love And Youth
A Hesitating Cloud Of Despair
Love Ain’t Just A Four Letter Word
Common Around Here
Hey, What’s the Matter?
Balcony Smoker

10th Anniversary Edition of Jenny Wilson’s debut album. Vinyl only. Includes a 60 pages book entitled “Notes and Memories 2005-2015”. The following essay appears in the book, alongside photos, lyris, notes on the tracks, fan-letters and more.

LOVE AND YOUTH – A DECADE LATER

10 years have passed since my debut album, ‘Love and Youth’, first came out. A friend of mine reminded me last summer. I myself, would never even have guessed that so many years had already gone by. And besides, I hadn’t given that old record a thought for ages. Leaving the old is part of making the new, I suppose. ‘Let’s make an album concert to celebrate this anniversary next spring,’ she said on the phone. ‘Hmm, okay…’ I answered without hiding my hesitation. I wondered how on earth I could possibly get these old, perhaps even childish songs to behave the way I wanted them to behave today. Would I have to raise them and force them to grow up? I was on tour when she called me, going somewhere, Hamburg, I think. And I did not want to return to the past. I just wanted to see the roads in front of me. To feel free, to be now. I simply decided to forget the anniversary for some time. Later, when I was back home in Stockholm, she reminded me again. So, I listened to the record, from the start to the end, from the end to the beginning again. I was surprised that it didn’t make me feel embarrassed. The songs no longer seemed as remote and old as they had a few years earlier. I could actually embrace them now. I even liked them. A lot.

To be exact, ‘Love and Youth’ wasn’t my first album. For six years, I was a member of First Floor Power. We released a bunch of untamed demo cassettes and a couple of less untamed CDs between 1997-2003. But ‘L&Y’ was the first album I made on my own, in my own name. It was also, by far, the most personal piece of work I had done. Back then, I was living in a two room apartment with my then boyfriend and our little son. It was on the ground floor, right across from a noisy school yard, in a milky grey suburb where people from all over the world tried to figure out how to live their life here on earth. Kids ran around everywhere, kicking their football in the staircase, our door became their goal. Shouting, playing, fighting, singing – a kids’ town, a rough town. I liked it. But the cops also ran about in the neighborhood all the time. And one afternoon, coming home with my son on my hip, the kids who used to play football in the stairway sat silently on their knees on the cold concrete floor. They had built a crooked little altar with candles and flowers, handwritten notes, maybe a drawing too. Their dad had just been killed, their uncle shot him.

It was there, with all these kids and cops running around the hood, that I learned the process of producing and recording. In our small apartment we had a storeroom, meant for storing winter clothes and boxes with crap you never use. This tiny space became my first studio, equipped with a PC, a Juno 106 and an electric guitar. This was my own private hide-out. My ex knew a lot about sound engineering and he had the skills to teach me how to use my very plain equipment. I could ask him thousands of questions while we were having dinner, feeding ducks in the park or watching TV. My music was constantly ongoing in my mind. I took every opportunity I had to sneak into that hide-out. In there, I learned how to program beats and how to make use of far more electronic sounds than I had before. I was eager to try all the things I’d never tried with FFP, and I really struggled to find a sound of my own (though when I listen to ‘L&Y’ now, it’s striking how much of FFP you can still find here – the melodies, the ornaments, the storytelling).

I worked fast – I followed the impulses that came to me, like a child that yet doesn’t know any rules, or has no fears. But I also worked awfully slow. It took time – a lot of time – to make everything from scratch by myself. I had to choose the roundabouts to find my own path. And I had to climb over (or crawl under) all the obstacles that occurred. It was far from easy. If there are no cook books, either you’ll have to write your own recipes and stick to them – or you’ll have to experiment and hope you’ll remember how to measure the spices right next time around. I was the experimental chef – no doubts about that, and by trial and error, a lot of chaotic soups got burned before I could serve a decent one. Perfectionism was simply never my thing. But when it came to the lyrics, I didn’t leave anything to chance.

‘Love and Youth’ takes place in the gap where childhood ends and adulthood sets in. It describes the shortcomings of being too old for playgrounds, but too young to smoke cigarettes and drink booze elsewhere. It explores the kid’s world, where school is just a prison to break free from, and the meaning of life must be found anywhere else but here. There’s a lot of violence – blood, bullying, fights, loneliness, parents with alcoholism, group pressure, doubts, disrespect. But there is also hope, a lot of hope. I decided to write conceptually, which turned out being much more difficult than I had imagined. But the challenge made me try so much harder, and I loved it! You see, to have to stick to one single topic forces you to twist and turn different scenarios, situations, memories, smells, flavors, feelings, etc. I really wanted to describe a certain time in life from all kinds of angels, and this way of doing it allowed me to dig deeper. It was an epiphany for me.

A lot of the inspiration came from reading the novel ‘Fateless’ by Hungarian author Imre Kertész. He describes how Georg, a young Jewish boy, is placed on a train to Auschwitz, and how he endures the horrors of the Holocaust by using some sort of magical thinking. He explains the most terrifying things, but always takes notice, and concentrates, on the good things in the misery. There’s nothing sprightly about it, not at all. It’s just an exact description of how kids deal with tragedies – by practicing the magical thinking, by inventing beauty in the ugliness, by reaching out for the light. The instinct of self-preservation, which I was most familiar with. I tried to apply that approach in my writing.

Since I was a child, I’ve always preferred to work secretly, alone. Hiding, clearly uninterested to share my private idea of my ’possible genius’ (who’s not brilliant, as long as you don’t have to prove it?). It is disturbing manners – I know, I’m the first one to admit it – but at least it gives you the space to find your own way of drawing the map or cooking the soup, even if you have to be prepared to get lost many, many times and burn the soup in its pot over and over again. But one day (in the hide-out), I was talking to Karin Dreijer (The Knife) and it just slipped out of me that I was cooking something in there. She asked me to send some of my sketches and demos, and with a beating heart I did. Only hours later she responded: ‘Do you want to release these songs? Maybe I could help you, if you want to?’ She was, without doubt, the one who actually made this record happen. I mean, the music was already there, but most likely it would’ve stayed a secret, hidden in a remote corner, if it wasn’t for her. She was respectful, sweet and kind, and very professional. I will always be grateful for what she did for me – and for this record. In April 2005, ‘Love and Youth’ came out on her, and her brother’s record label.

I would also like to thank a bunch of people who have been very important to me during this decade – you who have played with me, kept me warm, inspired me, believed in me, who questioned me, made me better, stronger, happier. And many thanks to you who have never stopped asking for more. Because, even if it might seem like I’m the most solitary, stubborn person in the whole business after reading this, I am not. I wouldn’t be anything if it wasn’t for all of you. I hope you know that.

And, in the end, returning to the past is part of bringing up something new. See you around, the universe is ours!

Guest musicians:
Joachim Ekermann – Electric guitar on ‘Would I Play With My Band?’. Bass on ‘Let My Shoes Lead Me Forward’. Acoustic guitar on ‘Those Winters’
Karl-Jonas Winqvist – Backing vocals on ‘Crazy Summer’. Shaker on ‘Balcony Smoker’.
Per Lager – Hi-hat on ‘Hey, What’s the Matter?’. Snare drum on ‘Love Ain’t Just a Four Letter Word’.

Buy at The Crunchy Shop 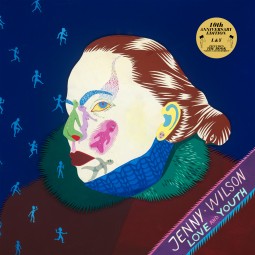