Thee Attacks “Strikes Back” was released exactly 2 years after the band announced their breakup. “Strikes Back” is a compilation of all the gooood shit that was never released or maybe just dropped as off the cuff singles along the way.

Baby Baby
On The Move
Rip My Heart Out
Please Tell Me
The Only One I Love
Twirling Around
Delta Sessions, recorded by The Great Nalna at Delta Lab, Copenhagen, in 2008. The first time ever the band went into a studio. Previously unreleased.

1010
Recorded in 2011 for a grand horse race event in Hong Kong. Previously unreleased.

I Know What I Want
Released June 2011 as ‘title song’ for the animated movie ‘Jensen & Jensen’. The track also featured in the trailer for the movie ‘A Bigger Splash’.

Fire
I’ve Been a-Waiting
LA Sessions, recorded by Rob Campanella (The Brian Jonestown Massacre) at The Committee To Keep Music Evil in Los Angeles, May 2013. The last recordings the band did. Previously unreleased.

All songs written by Thee Attacks, except ‘Johnny And I’ written by superheroes.
Published by Crunchy Tunes 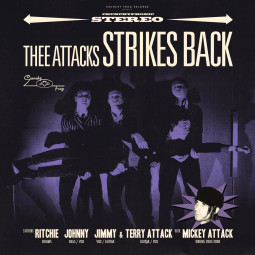